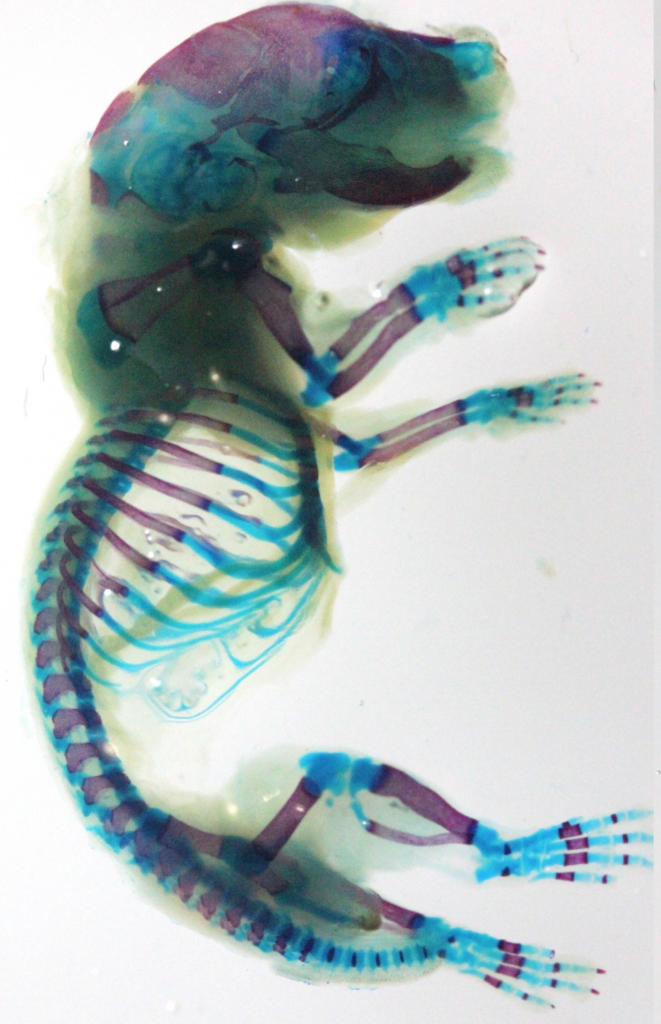 We are using the mouse model as a way to understand the biology behind two disorders who etiology is poorly understood.

AIS occurs between the ages of 11- 18 years in otherwise healthy individuals, and can progressively worsen over time. Over 90% of the cases are female indicating a strong sex-basis in scoliosis development.

The biology underlying AIS s poorly understood. However, several genes have been linked to these diseases as a result of genome-wide association studies (GWAS) and exome sequencing studies.

We are using a combination of ChIP-seq and RNA-seq to begin to understand the role of these genes in the normal development of the effected tissues and thus the biological pathways disrupted by mutations in these genes.  This has allow us to develop several hypothesis that explain the biology behind idiopathic AIS which we are now testing using CRISPR-CAS9 gene editing. The long-term goal of this research is to aid the development of evidence-based treatment for progressive disorders.

This research programme is aimed at understanding how the sex of an individual effects differentiation of the brain, and how this is associated with behavior or risk of neurological damage and disease.

We aim to reveal the finer biological details that underlie sex-specific differences in brain development during early embryonic development, and how this may relate to the sex bias presentation of many neurological disorders.  .

Do these differences in growth and development of the male and female brain reflect and underlie the sex-dimorphic responses to neurological injury and disease, particularly those affecting infants and adolescents?

Early development of the genital ridge and disorders of sex development.

The developing foetal gonad is unique as it has the potential to form two different organs, an ovary or a testis, from the same progenitor tissue. Reproductive development is fundamental to all animals, but to date only a handful of genes have been shown to be required for the formation of the genital ridge from which the gonads develop. Unfortunately, disorders of sex determination (DSD) are among the more common birth defects, occurring in 7 cases per 1000 births in New Zealand. Furthermore, there is a strong association between DSD and both testicular and ovarian cancer.  At least 30% of children with gonadal dysgenesis develop gonadal neoplasms that can go on to produce malignant germ cell tumours within their first 10 years.  Mutation or misregulation of genes involved in sex determination and gonad development are also associated with DSD-associated tumours, indicating a relationship between aberrant development of the gonad and increased risk of tumour formation.

Little is understood about the dynamics of genital ridge formation, and how outgrowth and proliferation of the genital ridge is controlled and maintained during gonad formation. We are using next-generation sequencing technologies to determine the gene networks and pathways that underlie embryo gonad development.